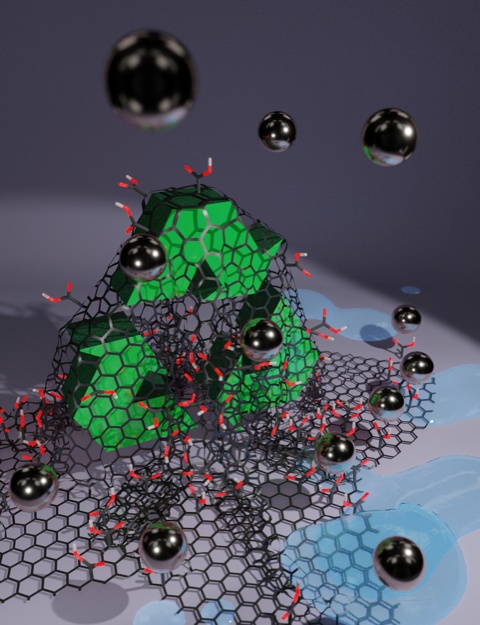 A new type of graphene acid-based sorbent, which can remove heavy metals from contaminated waters but can also serve to extract noble metals from aqueous environments, was developed by a team of scientists from the Czech Advanced Technology and Research Institute (CATRIN-RCPTM) of Palacký University, VŠB—Technical University of Ostrava and the Institute of Organic Chemistry and Biochemistry of the Czech Academy of Sciences. The results of their work were published by the journal of American Chemical Society—ACS Nano.

Securing a sufficient amount of drinking water and developing new technologies to clean contaminated waters is one of the greatest societal and scientific challenges. Heavy metals rank among the most common and highly toxic pollutants. If they are released into rivers or surface waters, they pose a major threat to the aquatic ecosystem and, due to bioaccumulation in vital organs, damage human health. For example, they enter the water during unregulated mining, as part of energy waste or waste products in the production of steel, electronics or batteries. “The most economically advantageous method for their removal is sorption on suitable porous organic and inorganic sorbents. The drawbacks of these sorption technologies are often the low capture efficiency of heavy metals and the weak interaction of the sorbent with metals, thereby re-releasing heavy metals into the environment,” explained Michal Otyepka, one of the participants in the research.

A newly developed type of graphene acid-based sorbent offers a solution to combatting the weak point of existing technologies. “This is a two-dimensional layer of carbon covered with carboxyl groups that serve as a binder for the capture of heavy metals. Since they’re bound by a fairly strong bond, there’s no leaching. After subsequent separation, by changing the solution pH, it is easy to separate heavy metals from the 2D sorbent, which can be used repeatedly for further decontamination without loss of efficiency,” explained the principle one of the corresponding authors Radek Zbořil. The large surface area of graphene acid and the high coverage of carboxylic bridges allow record efficiencies in, for example, removing highly toxic lead or cadmium.

Scientists have shown that the same technology can also be used to extract noble metals such as palladium, gallium or indium, which are released into the aqueous environment. “The supply of noble metals on our planet is significantly reduced and their cheap and efficient separation from waters with the possibility of their repeated industrial use thus offers great application potential,” said Aristeidis Bakandritsos, a member of the research team.

Graphene acid is a two-dimensional organic acid. “We prepared it recently using the 2D chemistry of fluorografene, which we have been developing in Olomouc for several years, also thanks to a grant provided by the European Research Council,” added Michal Otyepka.

This project has received funding from the European Research Council (ERC) under the European Union’s Horizon 2020 research and innovation programme (grant agreement No 683024 and 899245).